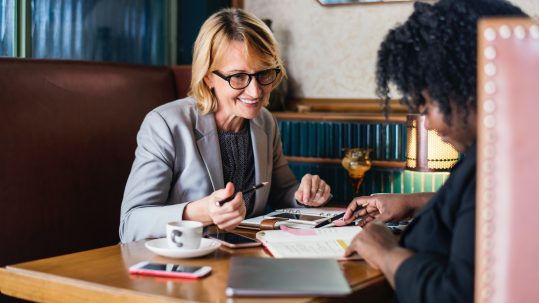 Many people are aware of the benefits of coaching, having had the opportunity to be coached themselves, or have friends or colleagues who have. What’s discussed less is the benefits of coaching for the coach. Here, we have a look at why it’s worth building coaching others into your career—particularly if you lead others, or aspire to – and three practical ways to go about it.

“Power stress” is a term that resonates with many of my clients. Fascinating research from eminent professor Richard Boyatzis and his colleagues from Case Western Reserve University suggest that leaders experience “power stress”—the potentially chronic stress that comes with working on things that are personally important, risky, and having others watching or critiquing as you seek to influence others. So this isn’t limited to those in official positions with a leadership title, but broader forms of leadership. This may include being a thought leader in introducing innovation or new ways of working. It may be in the context of teamwork or collaborative ventures and seeking to influence peers. Leaders can experience psychological and physiological effects from chronic power stress, and it can make it difficult to sustain the mental, emotional and behavioral processes that enabled him/her to be effective. Interestingly, they argue that coaching with compassion—focusing on others and helping them with their desired, intentional changes, can mitigate the psychological and physiological effects of chronic power stress. [I]

Coaching can be not only hugely beneficial for the person being coached; it can have powerful, positive effects on the person coaching. As a leader, building coaching into your career will not only help develop the people in your team, it is likely to help you sustain your leadership effectiveness.

You can build coaching into your career in many different ways. Here are three practical ideas that clients have found useful.

There are significant benefits of coaching not only for the person being coached, but for the person coaching and for the wider teams. Coaching is a skill anyone can choose to build in to their leadership and team dynamics, rather than a personality-based style. A senior professional in consulting who I’ve known for a decade shared his interest in becoming a coach. But his starting point was, “Rebecca, I couldn’t do this… could I?” If you’re interested in the idea of coaching, don’t let the negative self-talk of, “I’m just not like that” hold you back. It’s a powerful tool available to all leaders and professionals who seek to positively impact others at work.

This website uses cookies to improve your experience while you navigate through the website. Out of these, the cookies that are categorized as necessary are stored on your browser as they are essential for the working of basic functionalities of the website. We also use third-party cookies that help us analyze and understand how you use this website. These cookies will be stored in your browser only with your consent. You also have the option to opt-out of these cookies. But opting out of some of these cookies may affect your browsing experience.
Necessary Always Enabled
Necessary cookies are absolutely essential for the website to function properly. This category only includes cookies that ensures basic functionalities and security features of the website. These cookies do not store any personal information.
Non-necessary
Any cookies that may not be particularly necessary for the website to function and is used specifically to collect user personal data via analytics, ads, other embedded contents are termed as non-necessary cookies. It is mandatory to procure user consent prior to running these cookies on your website.
SAVE & ACCEPT